Systemair invests in production and software development. Management and sales are repositioning. 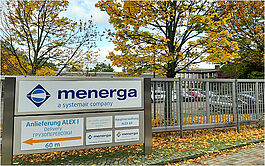 Menerga, a Systemair Group company, has announced several strategic decisions to further strengthen market position, product offerings and customer service. These include a change in management and significant strategic investments in several areas.

Menerga and its parent company Systemair has invested in a new and fully automated production line for Menerga AHU housing, significantly reducing production times. Furthermore, new software applications are being implemented, including an ERP system and a new product configurator.
The ERP system will enable an increase in productivity as synergies within the Systemair Group can be fully utilised.
The new configuration platform will not only enable user-friendly unit configurations, but also automates the flow of information from quotation to completion in production.

After more than 5 years Frank Ernst has decided leave Menerga GmbH. In March 2014 he took over the role as Managing Director of Menerga GmbH and since then has implemented many projects., He will continue to work with all in the Systemair Group and the employees of Menerga GmbH until he leaves at the end of March 2020. A succession plan is currently being developed.

In his new role, Kurt Maurer is supported by Per-Olaf Keitsch, former CEO of Hoval Enventus AB. Keitsch has already been working as an external Menerga consultant between February and April 2019. In May, he became an integral part of Menerga, acting as Chief Representative of the Menerga Management Board.

Frank Ernst stated: “It was an honour for me being able to develop Menerga over the past few years. Together with a very dedicated and motivated team we were able to implement globally recognised, highly innovative ventilation and air conditioning solutions for a wide variety of international projects. With Kurt Maurer and Per-Olaf Keitsch, Menerga is in the right hands to tackle the extensive upcoming developments”

Wolfgang Schäfer has been overseeing all German sales activities since the beginning of 2019, Between 2002 and 2019, Schäfer held multiple positions within Menerga, including, most recently, the regional management of Southern German sales.

At the beginning of October, Niall Horgan joined Menerga as Business Development Director, taking over the management of international sales activities. Between 2002 to 2012, Horgan was Managing Director of Systemair Ireland. He then held positions as Managing Director of Wolf Mainburg UK and Global Director Key Accounts at FläktGroup.